I'm a lifelong geek with a passion for books and social justice. And I give absolutely no fucks.
m

David Truesdale has written and circulated a petition (this was received directly from David Truesdale)–and gotten a number of SFWA members to sign it.

That, however, was not what was originally circulating.  This is.  And this is what I’ll be responding to below.

It’s full of appeals to the sanctity of the First Amendment–which, as a private organization, SFWA doesn’t need to abide by–and a whacking great heap of sexism and racism, too.  I don’t understand why some people are constantly conflating their desire to say anything they want, wherever they want, with private organizations’ right to moderate spaces that they own.

The essence of the situation is that a writers’ organization, of all groups, should not be establishing a committee to determine what is “unacceptable” or “inappropriate” or “offensive” in some contribution to one of its publications. SFWA should be the front line of defense for First Amendment issues, and not make itself part of the problem.

If one takes that argument to its logical conclusion, then why have an editor at all? Let’s just publish whatever gets sent in!  Also, again: SFWA is a private organization and the First Amendment doesn’t apply.  Just like this space is a not-the-government and I get to make the rules about who gets to talk here and who doesn’t.

The cover of the 200th issue of the Bulletin was part and parcel of the furor that has led to its suspension. Cries of “sexism,” portraying women as “sex objects,” and other like phrases reached the ears of the President and will now become part of the “review process” overseen by the new editor, “volunteers and an advisory board” and the President himself. Covers like the one shown here are not new. They have graced the covers of countless magazine and book covers for many decades. So have magazine and book covers featuring handsome, ripped and rugged males in various stages of dress, depending on the story and what the publisher hopes will appeal to his readership in order to advance sales. Yet there are those who object strenuously to a sexy female (scantily clad or otherwise) on the cover of anything, and always somewhere in the mix of reasons, primary among them is that women are being portrayed as sex objects and that such covers are blatantly sexist and therefore are to be avoided, or removed, or are otherwise to be castigated and held up to ridicule and scorn.

Let’s refresh our memory about that cover, shall we? 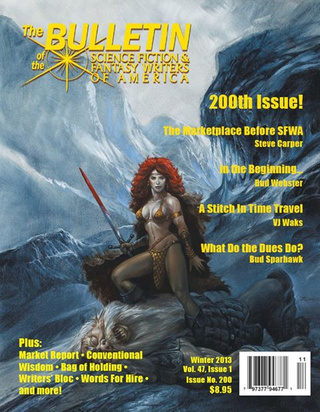 It would be one thing if this cover had any sort of relationship to the contents of the Bulletin, but it didn’t. It’s a badly done painting of a not that sexy, mostly naked warrior at severe risk of frostbite. And the Resnick/Malzberg column was about how hot some lady editors were in their bathing suits and nary a mention of their facility with a red pen.  Objectifying and dehumanizing. No wonder people objected.

And if the next two issues hadn’t been a doubling down on said objectification and dehumanization, people would have let it pass.  It was the fact that there were three issues in a row that were full of sexist and racist nonsense that caused the uproar–and rightly so in my opinion.

Then Truesdale embarks upon a long digression on how ogling objects of desire is something that everyone does (well, not exactly everyone) and how it should be completely okay.  You know what? Not in a professional context–which the SFWA Bulletin is. The SFWA Bulletin should be about publishing and writing speculative fiction in an increasingly volatile marketplace, not about the good old days when the female editors were smokin’ hot in a swimsuit and didn’t let themselves be offended by red-blooded American male approval. Or, at least, didn’t let on that they were offended.

Ladies these days.  Just don’t know anything about quiet dignity.

Then–oh then.  Truesdale hauls out the very best part: he has a black friend!  A black lesbian friend! Who is never named but who nonetheless goes on to agree with and bless every single one of Truesdale’s arguments.  If this friend exists, I feel sorry for them, as they’ve been reduced down to their racial and sexual identities.

I want to emphasize that I am not trying to shut people up who hold deep feelings about their views on sexism (or any other topic). What I object to and find odious is that certain folks, in their self-righteousness, want their views to override all others, silencing them, and now they have a President in their hip pocket who is willing and able to do their bidding. Their views should be open for discussion—and print in the Bulletin—just like the views others hold on any variety of important subjects, but not to the exclusion of any opposing (and just as deeply felt) view or mode of expression from anyone else. That approach is the inclusivity and diversity you’re looking for.

SFWA members don’t pay their $90 annual dues to be told what to think or how they should express themselves in the pages of the Bulletin, nor do they want their own thoughts (through their articles or columns) to be deemed “acceptable” or “right thinking,” or adhering to some jumped-up (always subject to change at whim) PC style manual by some hootenanny “advisory board”” of boot lickers.

Okay, then. Again: I wasn’t aware that the Bulletin was supposed to be a free-for-all, where anyone can say anything.  I thought it was a professionally edited magazine for professional writers that is supposed to have content that is of use to the specific audience.  I don’t think six pages of Mike Resnick and Barry Malzberg going on about the good old days is really very useful to the membership; I read some magazines that have personal essays in them and they’re usually one or two pages, at most.  Six pages is a lot of real estate for reminiscing about how awesome it was to be a writer 30 years ago.

Far from an editor, this person will be nothing more than a slave, dragging his bundle of copy to the mansion from the field, where the “review process,” and some proposed “volunteer and advisory board,” and the President himself will be making the real “editing” decisions. You gather the cotton, we’ll spin it into what we think looks good for us.

Yep. He went there.

Ultimately, though, Truesdale’s argument is thoroughly dishonest.  He’s trying to get people riled up over someone editing the publication and he’s doing so in an incredibly offensive and gross manner.  He’s claiming that this is a free speech issue when it isn’t. SFWA is not the government. They can’t stop you from saying whatever damn fool thing you want. All they can do is stop you from saying it in their publication.

Luckily for you all, Sunny Moraine has written a handy guide explaining what the First Amendment means.

C.C. Finlay makes the point more eloquently than I can as well.

So hey: Don’t let the door hit you in the ass on the way out.

EDIT 4:30 PM: I was provided a copy of the first (unedited) version with additional signatures.  You can find it here.  This version was being sent out via email by David Truesdale as late February 8.

As expected, I did not win the Hugo for Best Related Work; instead Maria Dahvana Headley's transcendent translation of...

Regaining a small bit of confidence in my own competence through a website redesign.

"It's chaos, be kind."
Michelle McNamara